Education is the only thing that can help anyone to learn and improve. I-Medita has always realized the importance of learning, education and change. Such efforts have always led to many workshops, fests, training programs and placement programs and a vision for a better tomorrow. At I-Medita, workshops are designed to be fun. Workshops here are to get the mind running with new and amazing ideas and to turn them into reality.

On 25th – 26th September 2015 a Cisco networking based workshop was held in Vishwabharati Academy’s College of Engineering, Ahmednagar, Maharashtra. Madhuri Rokade and Mrs. S.G. Joshi (faculty coordinators) helped in arranging one of the most successful workshops. They were teamed with the student coordinating army consisting of Shaikh Salman, Mandal Akash, Atri Kapil, Belehekar Pratik, Kukade Yadnesh, Shetiya Siddhi, Sayyed Tabish, Shaikh Eesra. A successful workshop was bound to happen as all the coordinators prepared for this with all their hearts.

With student coordinators radiating the zest, the workshop started by 9am sharp. The coordinators had arranged everything well in advance and hence the workshop started nicely. The morning pleasantries were shared amongst the teachers and the trainer followed by a very motivational speech by the teachers. The trainer then started the basics of networking and the concepts that have evolved over a period of time. The trainer went on to teach the layers, protocols and revised technologies which formed the base of networking. The topics discussed were:

With so many new concepts to understand and learn, the students then indulged in discussing sessions and doubt solving sessions.

The very next day, everyone was prepared for the practical demonstration of how the design, configure and troubleshoot network devices. They were also introduced to the real-time devices and their configurations.The students were taught how real-time devices work in industries, their series, securing a network etc. The practical was performed on the following topics:

Soon with the practical was over and it was exam time. With the basic idea in mind, the students prepared for the coming practical test, As soon as the exam began, the first three winners were selected , congratulated and awarded with special Excellence Certificate. Other students were soon certified with a last doubt clearing session. 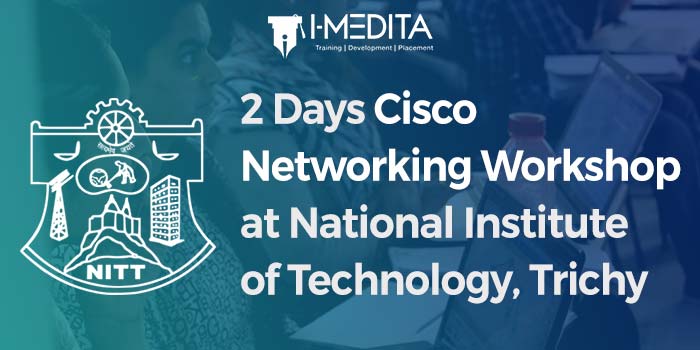