Static Routing is a process in which a network admin will configure the other network’s information manually. Since we already know about different routing protocols, let’s learn about Static Routing in details.

Why use Static Routing?

AD Value of Static Routing is 1 that means it is most reliable protocol available for routing after Directly Connected networks (AD=0). It is also easy to implement in comparison to other routing protocols but only in a small network. If network is large, it is hard to configure and manage if Static Routing is running. We will check that in configuration part.

There are a few concepts that one should keep in mind while configuring a static route. Concepts like number of Indirectly connected network, Next hop address, exit interface and use of ad value. To configure first we have to assign IP addresses to router interfaces and hosts. After that, we will go to configuration mode of router ans use ip route <destination network> <destination subnet mask> <next hop address or exit interface>.

To understand it better, lets take a topology for example,

Using Static routing in a network

That is only 1 command because there is only one Indirectly Connected network. If there are more than one network, we have to give information of all the indirectly connected network on each router. Watch the following Video for detailed information.

If a router has more than one path to reach to the destination, it is its’ responsibility to select the best path. Router will select the path with better AD value and by better I mean less AD. We can do path selection in Static Routing with the help of next hope address or exit interface. Consider the following topology for example,

Path Selection with the help of Static Routing

We can also use ip route <destination network> <destination subnet mask> <next hop address or exit interface> <AD Value> for configuring AD Value for specific route. Changing AD from 1 to >1 will make that path less reliable in compare to other. Take a look,

Here we have multiple paths, if we want use command ip route 12.0.0.0 255.255.255.0 11.0.0.2 10 at router 1, upper path will no longer be the best path from PC-1 to PC-2. It will be used as backup instead. If lower path fails then only upper path will be considered. Changing AD Value to 255 will make the path completely unreliable and that path will not be installed in Routing Table… ever. So use AD carefully. Everything you need to know about CCNA Security Certification 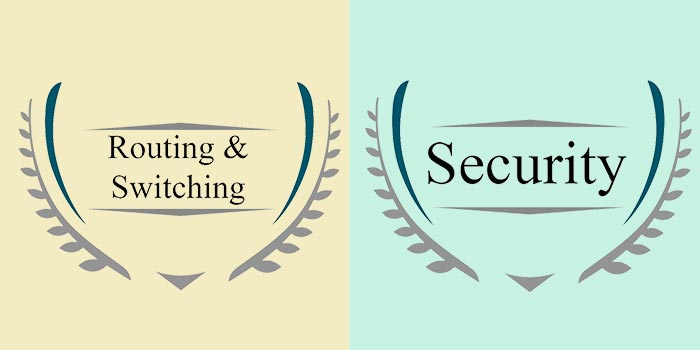 Comprehensive Difference Between Routing-Switching and Security